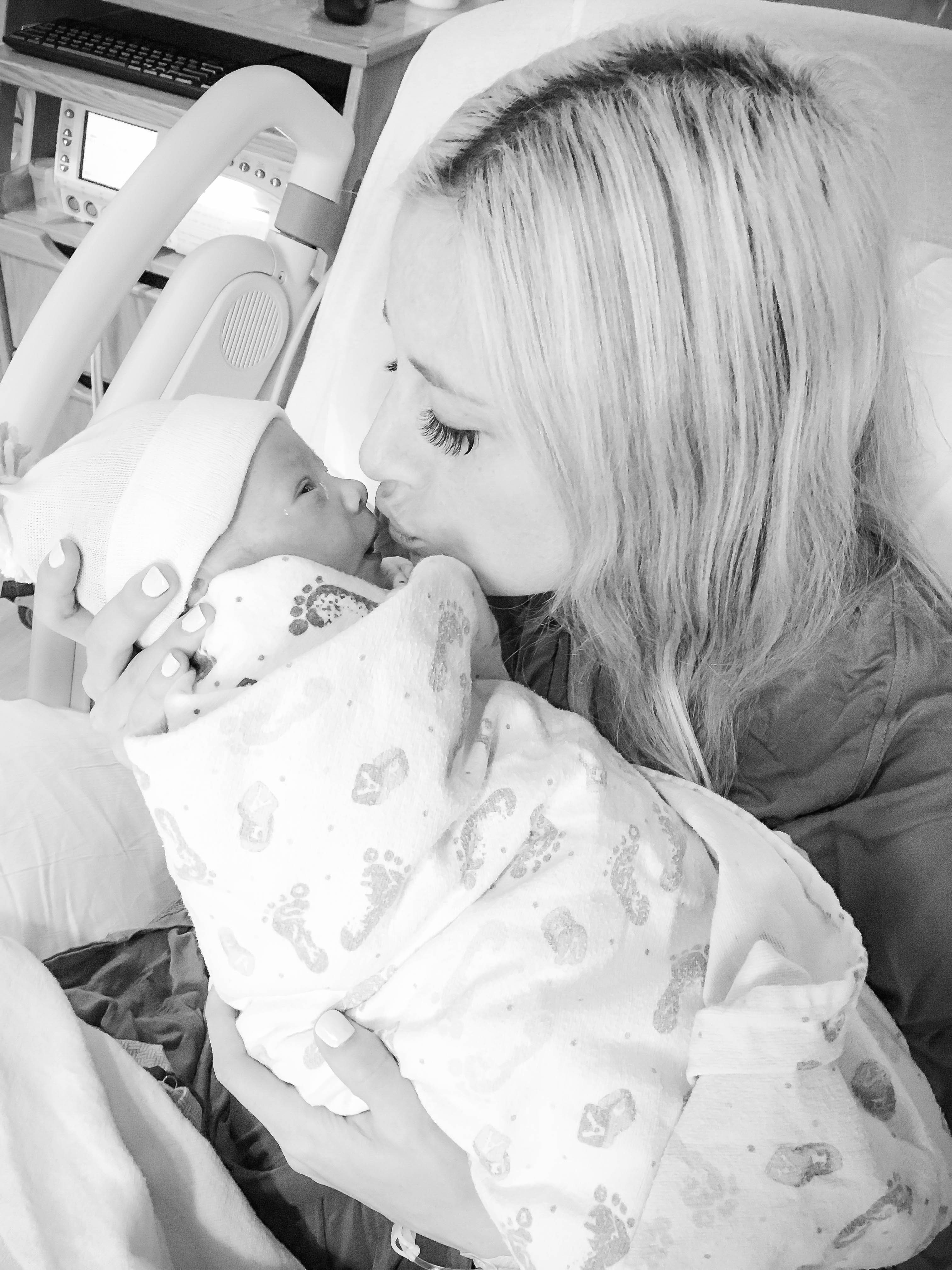 When I went to sleep on March 17, I didn’t know I’d be having a baby in less than 48 hours. Benjamin was almost a week past due and I had scheduled my induction for the evening of March 19. At 4:30 a.m. on March 18, I awoke with contractions. By 9 a.m. Matt and I were headed to the hospital and I was ready for my epidural. 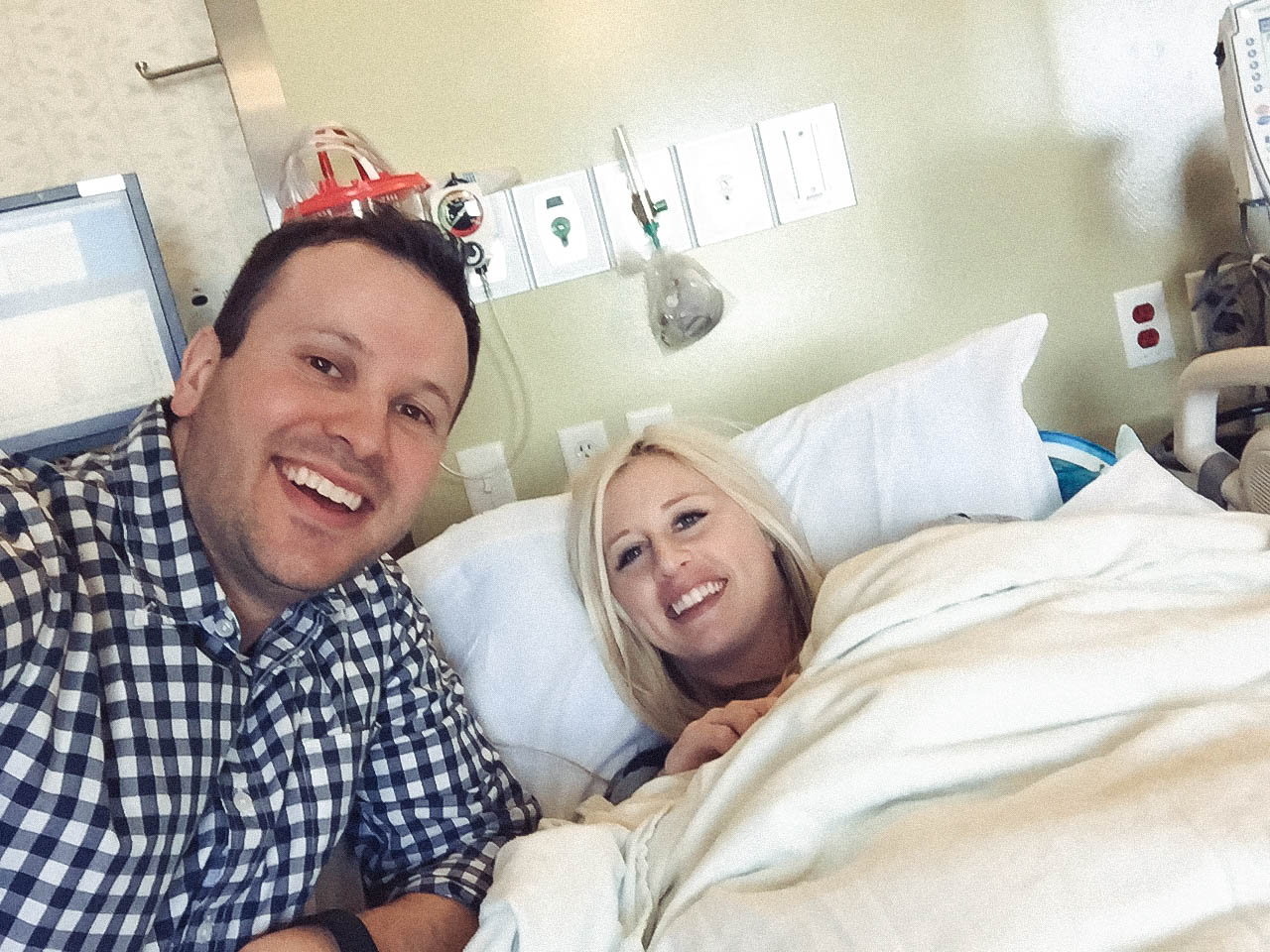 At first, we were just casually hanging out in the delivery room. I couldn’t feel the contractions anymore and the nurses had started my pitocin to progress my labor. The adrenaline and newness of it all was keeping us wide awake, and although I had (unfortunately) thrown up my small breakfast after receiving the epidural, I was enjoying an endless supply of orange popsicles, ice chips and Gu energy gel (thanks to my marathon-running sister for loaning me extras).

We watched several March Madness tournament games throughout the day and even though things weren’t progressing quickly, I figured we’d have our baby in our arms by the end of the night. Especially because Friends came on TV and guess what episode it was… The One Where Rachel Has A Baby. I was certain the odds were in our favor. 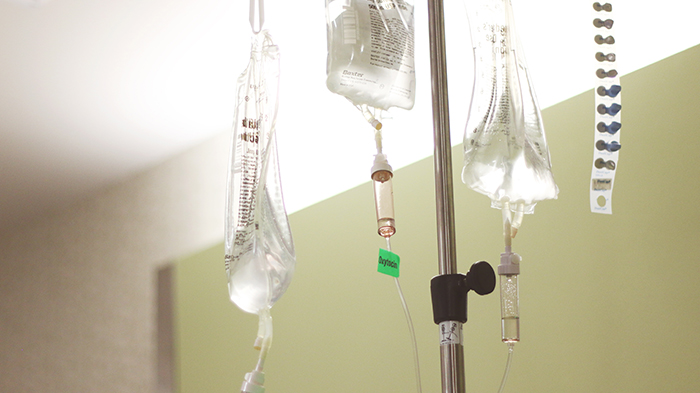 The pile of warm blankets on top of me was growing deeper but labor was far from over. Several nurses had started and ended their shifts and the only thing keeping me calm (other than Matt’s sense of humor and the fact that I was in the hospital) was the sound of Benjamin’s heartbeat on the monitor. I was dilated to 3 cm when we arrived at the hospital and the pitocin was causing his heart rate to drop so the nurses were playing a balancing act of dialing it back and then turning it up again. By 10 p.m. or so I was dilated to 6 cm and my mom had finally arrived. For Matty and me it was a long day of waiting on empty stomachs (we’d actually brought a nice bag of goodies that came in handy for him, but for me it was popsicles and ice). 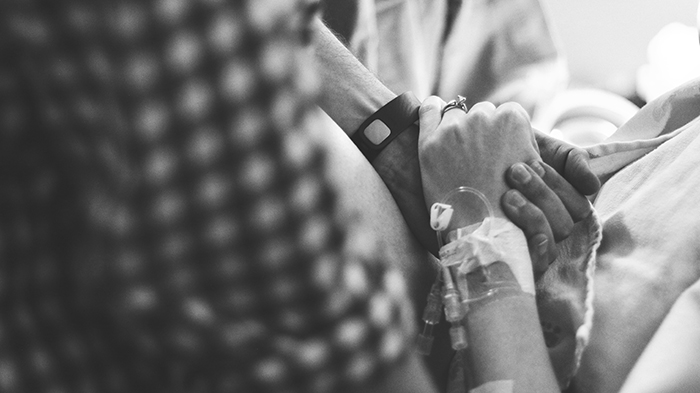 Finally around 3 a.m. I was fully dilated and the nurse started explaining how to push through the contractions. I felt somewhat prepared after watching Rachel Green have her baby so I grabbed both my legs behind the knees and on the nurses count I began to push. With each contraction, I pushed as hard as I could for 10 seconds, released, took a quick breath, and repeated for another 10 seconds two more times. The hardest part about getting an epidural is not being able to feel how hard you’re pushing (Not the injection or size of the needle—that is a myth in my opinion. Getting the shot did not hurt at all.). 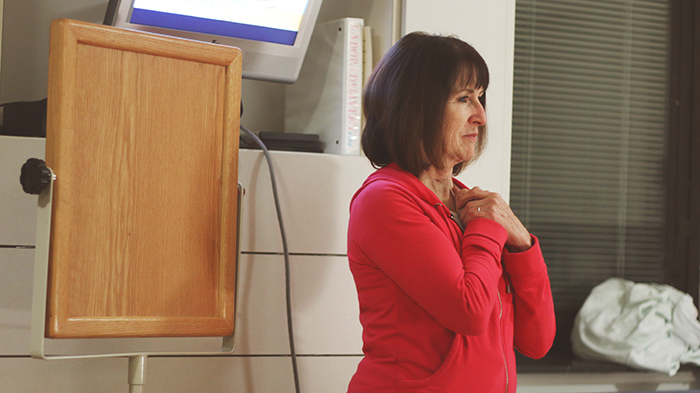 Somewhere into hour three I definitely hit a brick wall. Physically, emotionally, I was drained. It was the hardest thing I’ve ever done in my life, epidural and all. The pain was in the strenuous pushing every couple of minutes with each contraction. Back to back to back. When I’d rest in between, Matt and my nurse were rubbing my throbbing head and aching shoulders. The pressure on my stomach was not welcomed by the acid reflux I’d had all pregnancy, so we were also stopping every few contractions to allow me to puke (dry heave, really, since all I’d eaten were popsicles and ice all day). That fun little twist made it all the more exhausting.

Approaching hour four, my doctor gave me some options. Benj was just not descending very far in all the hours of pushing so she asked me to choose from the following: 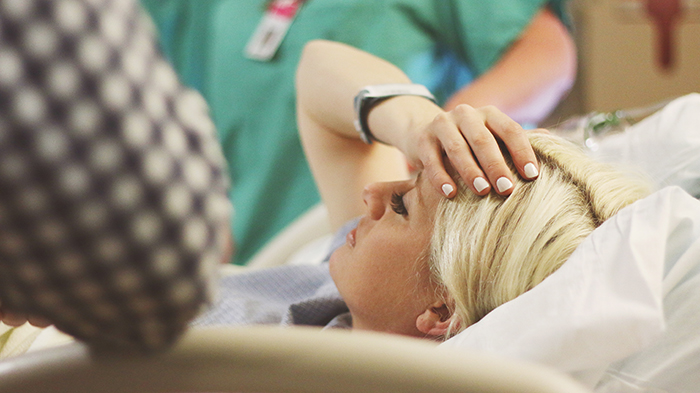 First, I cried a little more. I felt like a failure taking up so much of everyone’s time and making zero progress on bringing this little baby into the world. I turned to Matt and asked him what we should do. He asked my doctor about forceps and she began to explain the risks… brain damage, head trauma, etc.

I cried harder. I felt like this baby was going to die before I could get him out. We’d already been through so much to bring him here and in my discouraged state, I was convinced this was the end of the road. I was almost too emotional to make the call so I relied on Matt to give the go-ahead.

Suddenly a team of what seemed like 20 more nurses came into the room, each setting up their own little stations, preparing for delivery. My doctor was in position with the forceps locked around Benjamin’s head. I pushed two more rounds of 10 seconds each and on the second round, his head came, followed quickly by his body.

The fear went out with the pressure. 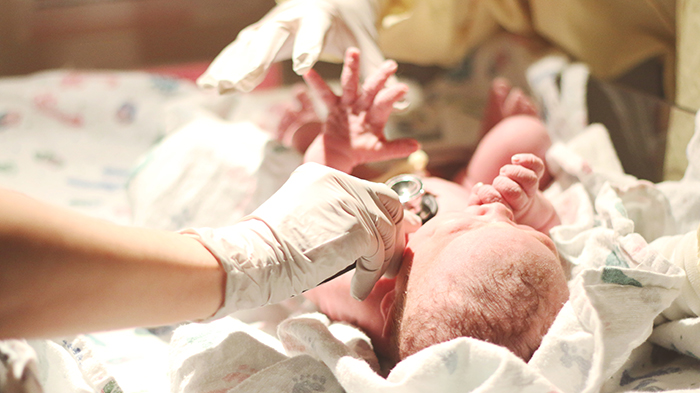 AFTER FOUR HOURS OF PUSHING 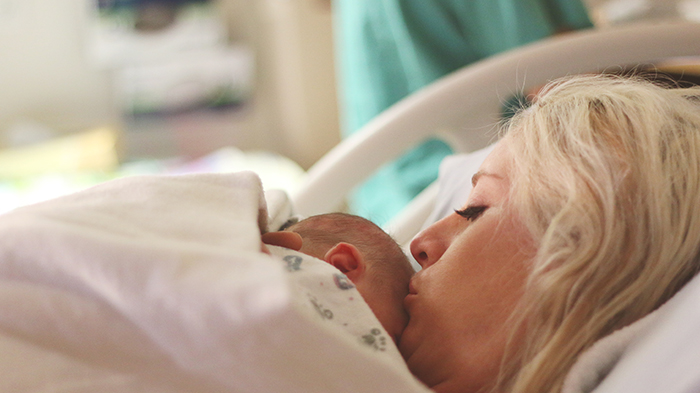 It was the weirdest sensation I’ve ever experienced to feel his body leave mine. Before I could blink he was on my stomach and the feeling of his warm, slimy body in my hands was all I could focus on. And his little bummy. I was instantly in love. I started sobbing and looked over to find Matt sobbing beside me. There are no words to describe how incredible that moment was. And the long, painful labor I wouldn’t have done any other way because the reward of holding him in my arms was made that much sweeter by the intense struggle that preceded it. 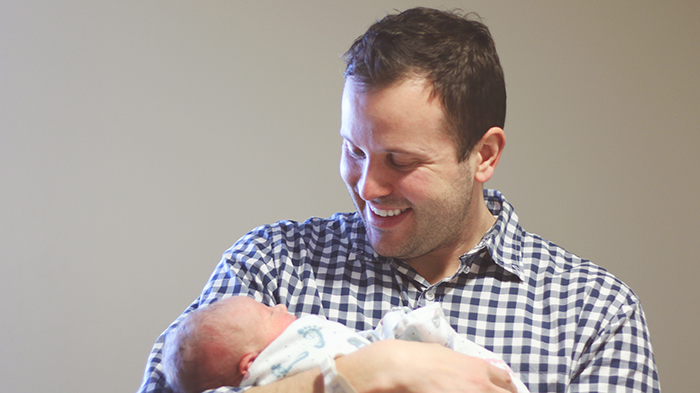 We finally did it! All three of us. Benjamin Bear Sanchez was here, ending our year-long IVF journey and changing our lives forever. We feel so blessed every minute of every day to call ourselves parents to this sweet angel baby. He is our biggest adventure. 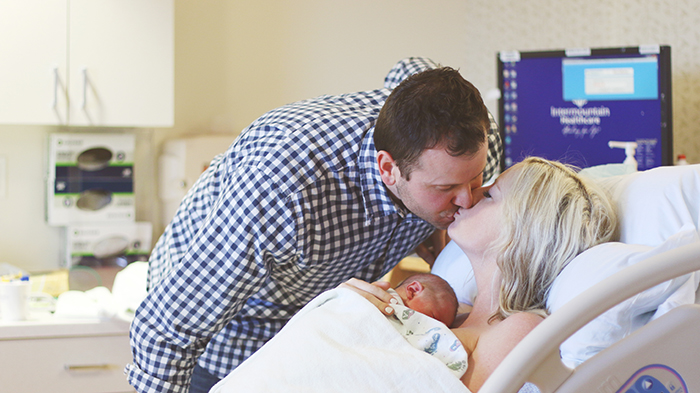 Below is a small clip from Benjamin’s birth story video by December Rose Film. I wanted to share the full video with you, but Matt and I decided to keep it to ourselves and our family since this was such a sacred, personal event. Deciding to do a birth video with Alexis was the best decision we ever made. I cry every time I watch it. She captured the sentimental moments of his birth flawlessly and gave us the ability to recall the tiniest details of that long, laborious, and glorious day. If you’ve never considered doing a birth video, I strongly recommend it. I had never considered doing one before, but I am so so glad we did. (Alexis, I love your guts!)

We’re welcoming Benjamin Bear to the family with these beautiful gold-foil-pressed birth announcements c/o Minted. I love the two-sided design that allowed us to use multiple photos and the rich feel of the double-weight paper. To see the full selection of birth announcement designs from Minted, go here. 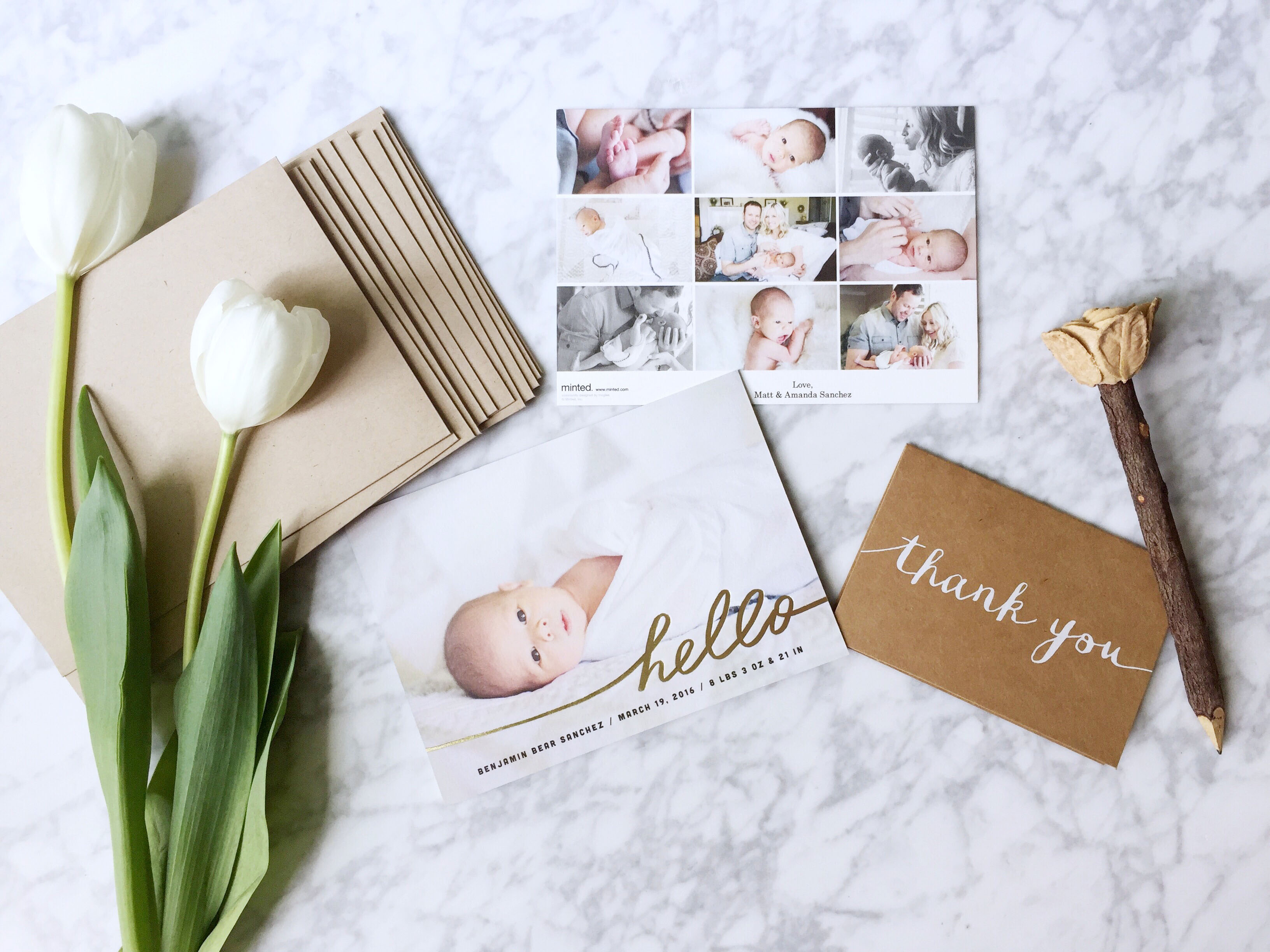 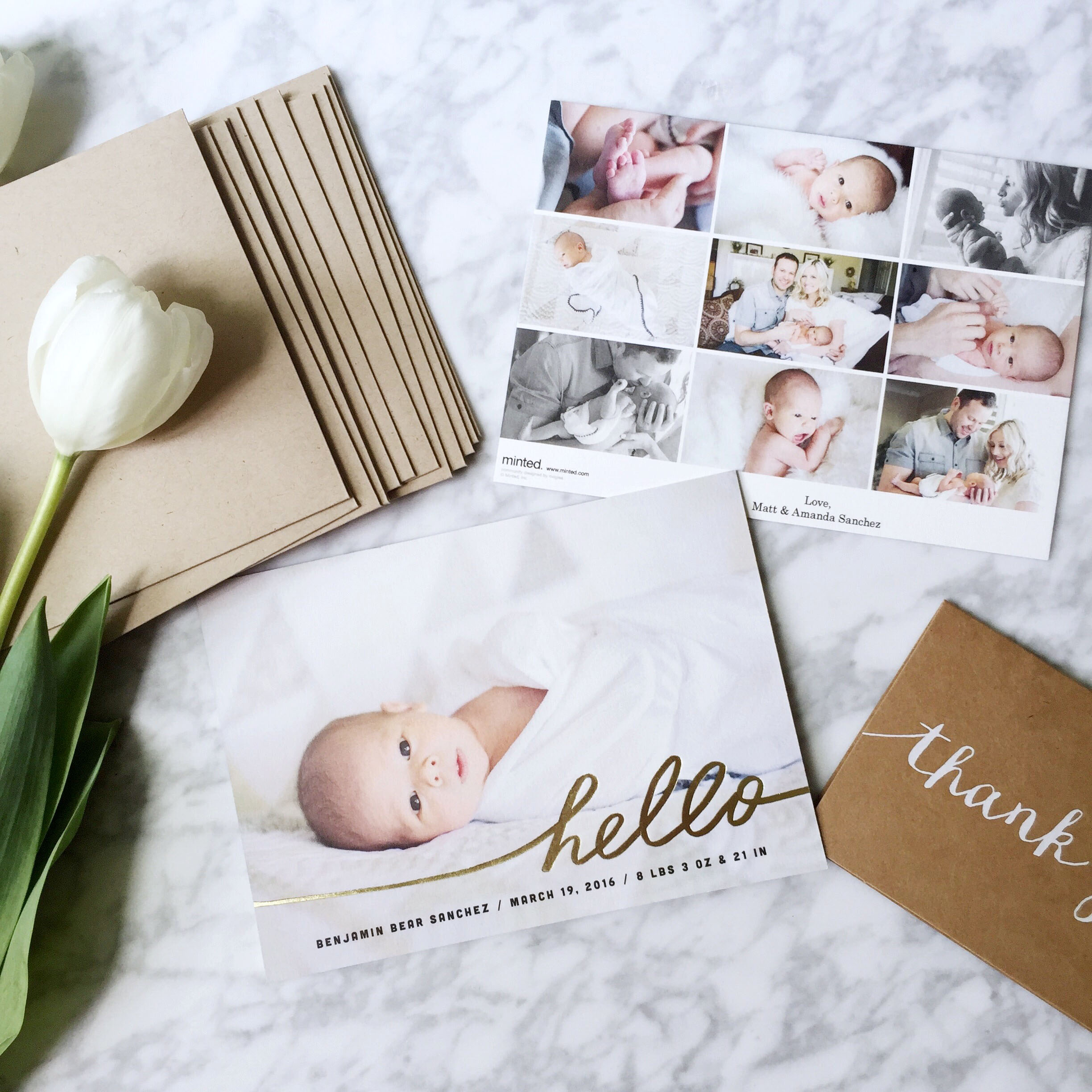 Thanks so much for reading about this incredible event in my life. I am forever changed.

And Happy Mother’s Day to all of you mamas and mamas-to-be!

Thank you cards via Target. 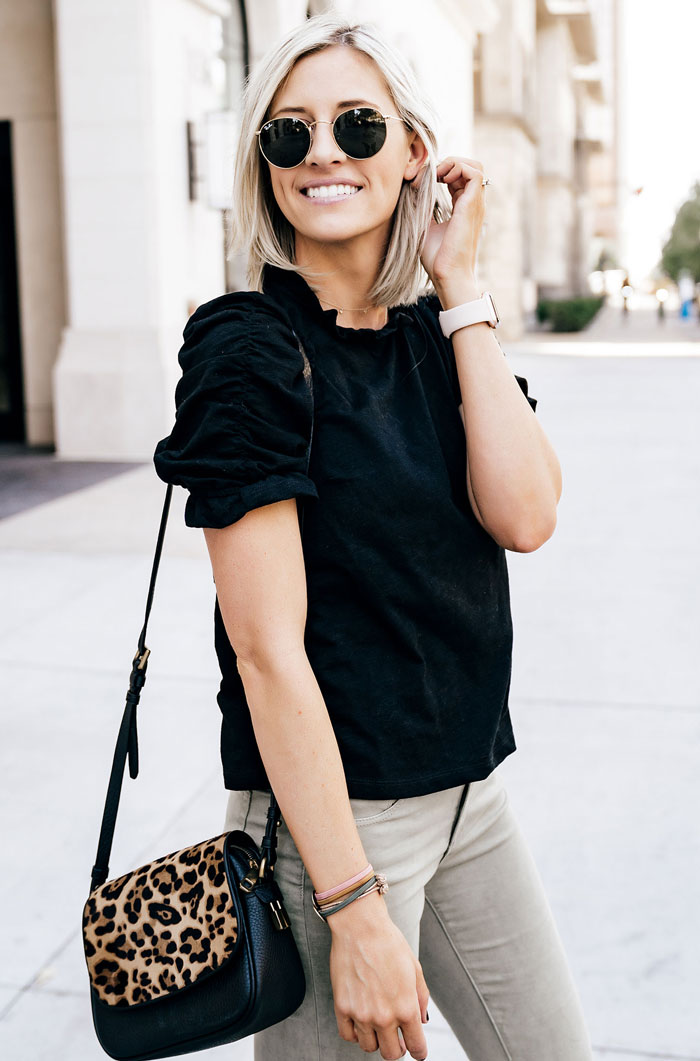 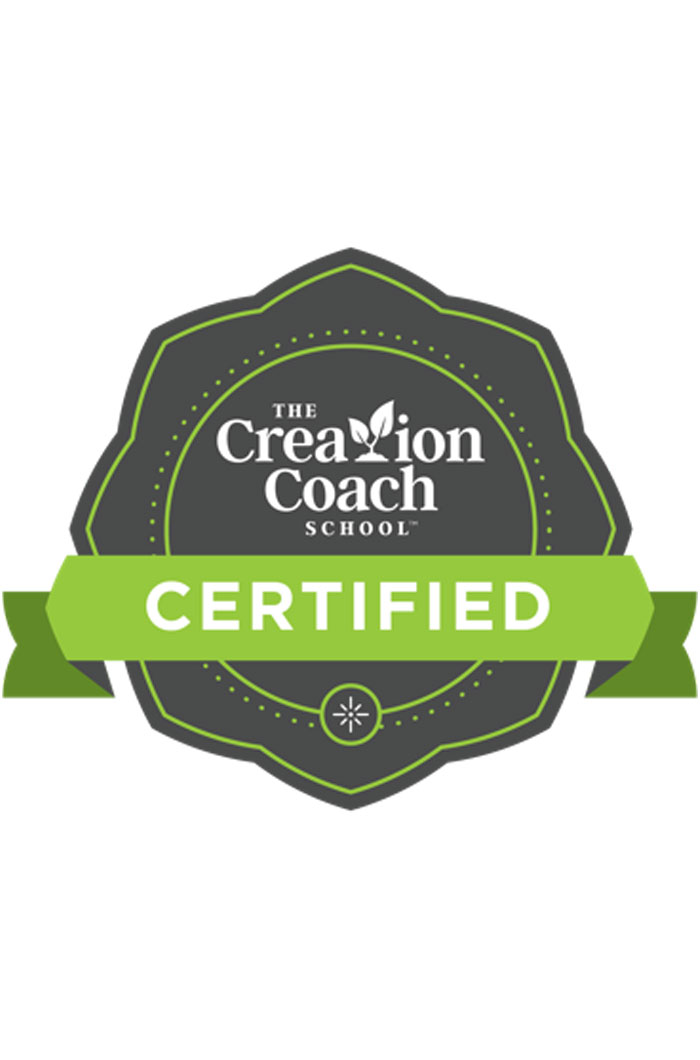 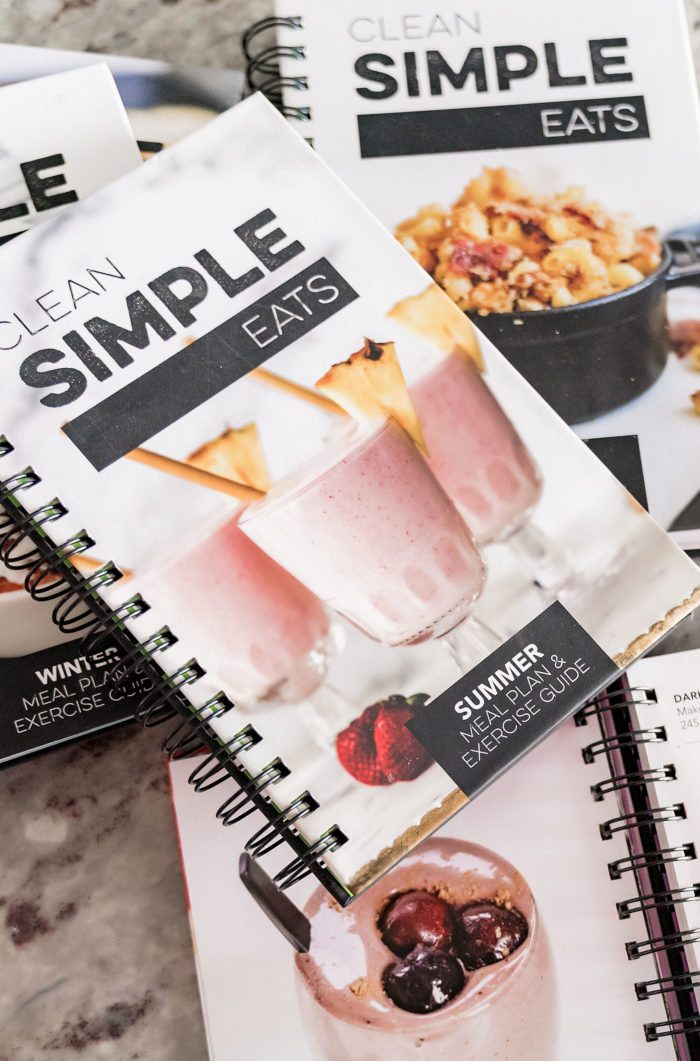 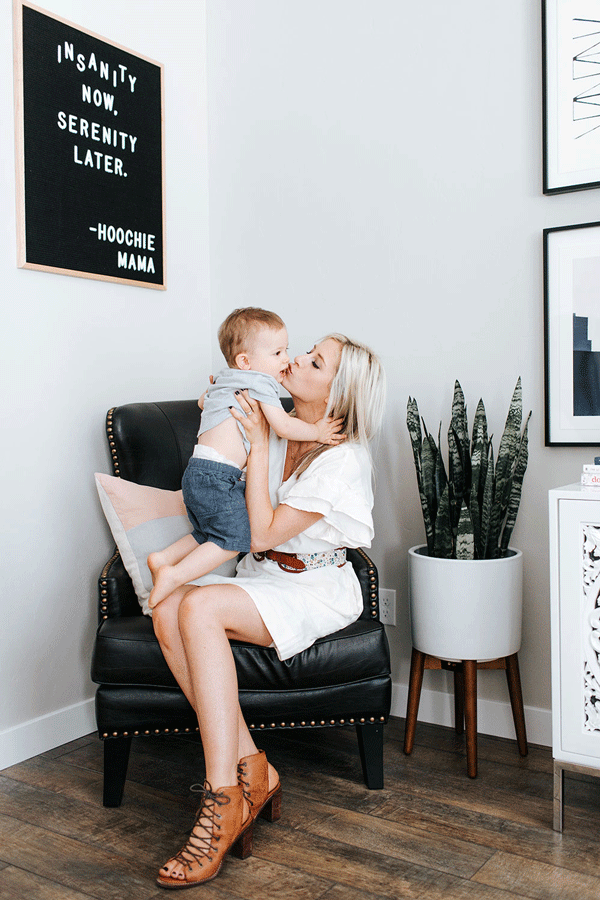